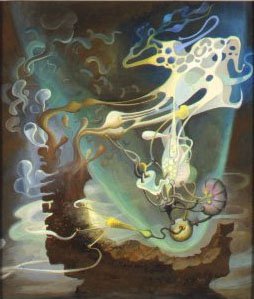 My father observed the age of science and technology with some reserve. While he did not deny the benefits of innovation, and certainly used some of its conveniences, he was not comfortable with the prevalence of standardization and mass-production techniques. He also found commercialism and advertising as delivered by American mass media rather crass. He felt out-of-step with the period of history he lived in because it increasingly brought uniformity to the places people lived, and lessened the individuality in how people shaped their daily lives. He was frustrated by the influence of big business and how it contributed to the diminishing role and beauty of local traditions, vernacular building styles and folkways, in terms of their influence on the way places looked. He admired the creativity of the individual craftsman. He would see the artistry in something as simple as a hand-painted sign on a street corner. He admired individuality in the creative act, and sought out the beauty of human imperfections in handmade work. He sometimes talked to me about “accidents” in painting that led to new discoveries.

Nonetheless, he was not adverse to the advancements of science—but he did see that field from his own unique perspective. In the mid-1960s, he was invited by his niece to visit her chemistry lab at Barnard College in New York, where she was studying. He was very interested in seeing where she worked. My father was fascinated by the arrangements of test tubes, pipes, beakers and measuring instruments he encountered, taken by their visual complexity and variety of shapes. This painting, called Transformations, was stimulated by his brief encounter with the world of the chemist.