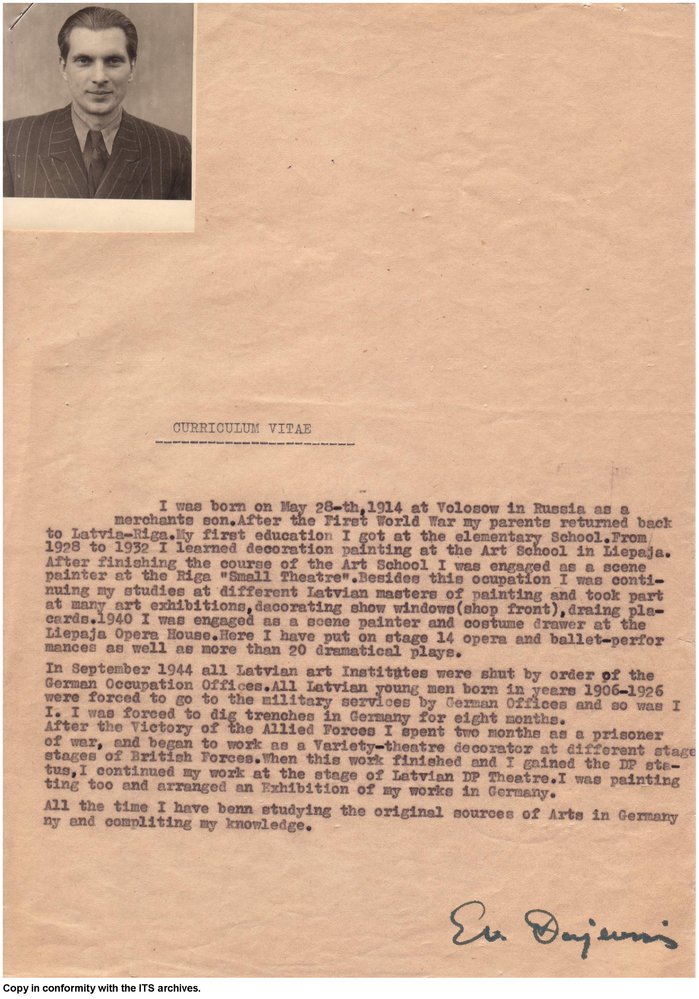 A Journey of Rediscovery

On August 7, 2007, I opened the Sunday New York Times and saw a picture of my father. An ID photo of a young man in a pinstripe suit, an unnamed Latvian set designer, accompanied an article describing the recent opening of the International Tracing Service’s (ITS) Holocaust and Displaced Person archives in Bad Arolsen, Germany. Among the 16 million personal documents housed in the ITS’s complex, my father’s file, including his C.V. and examples of his work, had been singled out. The article reported on the opening of the American archives of the ITS after 40 years of restricted public access. The Holocaust Museum in Washington, D.C. had persuaded the authorities to make the archives accessible to the general public. And now my father’s story had become a part of this major event.

When my disbelief had subsided, I got in touch with the article's author, Mark Landler, then the Times' European correspondent. On his suggestion I contacted the ITS archives. I eventually flew to Bad Arolsen and retrieved some of my father's personal documents and sketches, a few of which are shown here. The New York Times story and invitation from ITS officials to visit motivated me to dig deeper into the stories my father had told me, and to explore the art that he had created during the war years. I decided that the time had come to explore my own collection of over 200 set designs and paintings, which my dad had left me when he passed away. I came to the realization that a retrospective exhibition of his work was needed to place his life and his work in historical context. This exhibit is the outcome of that Sunday morning when I opened the paper to read my own father's story. It is part of a farewell tour of his art in the United States. In 2014, his work will be donated to the Liepaja City Museum in Liepaja, Latvia, where his professional career began.