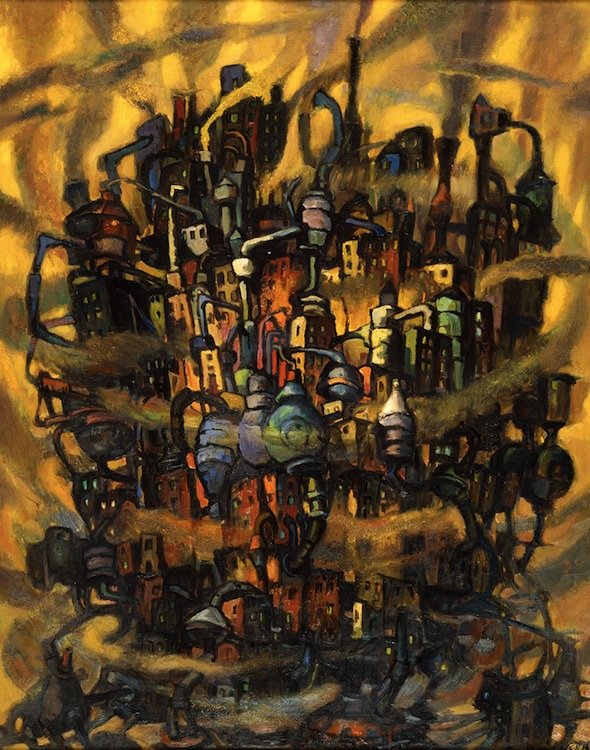 Upon arriving in New York in May 1951, my father encountered a landscape radically different from the ones he had known in Europe. His artist's eye was drawn to the visual complexity of New York City, with its multitude of buildings, bridges, tunnels, smokestacks and industrial areas.

The industrial areas in particular were exciting to him, inspiring fantastic new forms in works based on the city he soon adopted as his home. From our home in Flushing, Queens, he would ride the Number 7 subway towards Manhattan, getting off at the stations in Corona, Woodside, Sunnyside and Long Island City. The view from the elevated station platforms let him look out over the airier parts of the cityscape. Rooftops, chimneys, antennas, clotheslines and guy-wires became the subjects of his outdoor compositions. Sometimes he traveled to Brooklyn to study the dramatic views of lower Manhattan from the Gowanus or Sunset Park neighborhoods.

He walked the city’s streets taking numerous photographs and brought his plein air paint box with him to locations along the waterfront. Family members thought some of the neighborhoods he ventured to were risky places to visit, so on some occasions I was asked to join him as his “bodyguard.” My father saw beauty in the old buildings and piers and shared his excitement for the city with me. The studies he painted under my watch became reference material for many paintings, including Smokestack Cluster.

"In 1949, the Latvian Theater of Meerbeck ceased operations, as the Latvian DP emigration commenced and refugees began to relocate to distant corners of the globe. Along with my wife, actress Helga Gobzine, and our two-year-old son, Peteris, we found ourselves in Brooklyn, New York by May of 1951.

Having no knowledge of English, I had no illusions about working for the theater. But very soon, after having worked on a variety of odd jobs, my friend Osvalds Ursteins had managed to locate a theatrical agent who was quite interested in seeing my design sketches. After becoming familiar with them, he made an introduction for me to meet the Broadway and film producer Michael Myerberg. It appeared that my work was of interest to the producer.”