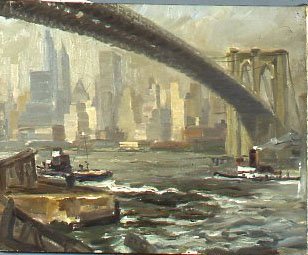 Many of the outdoor scenes my father painted were views of the New York City waterfront along the East River. He particularly loved the old abandoned dock buildings and the tugboats and barges on the river that moved past the eroding harbor infrastructure. The striking forms of lower Manhattan’s skyline were the backdrop for this outdoor study of the Brooklyn Bridge. He tried to capture the harbor atmosphere and the typical blue-gray tones of the city. On other occasions in the late 1960s, he painted ordinary street scenes in the vicinity of Fulton Street, Water Street and the historic area along Schermerhorn Row that would eventually be redeveloped as part of the South Street Seaport complex. My father’s work captured characteristic elements of New York life, such as the street sweeper, with his wheeled trash bin and broom in hand, or a lonely dump truck parked between buildings on an abandoned lot. On several occasions I accompanied my father on these study trips. He asked that I keep an eye open for him as he painted the more rugged and empty waterfront settings under the suspension bridges crossing the East River.